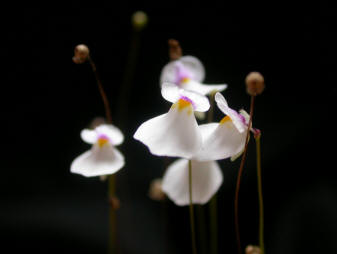 Utricularia can survive almost anywhere where there is fresh water for at least part of the year: only Antarctica and the oceanic islands have no native species. In common with most carnivorous plants, they exploit ecological niches poor in dissolved minerals, where their carnivorous nature gives them a competitive advantage; terrestrial varieties of Utricularia can frequently be found alongside representatives of the carnivorous genera Sarracenia (pitcher plants), Drosera (sundews) and others in very wet areas where continuously moving water removes most soluble minerals from the soil.

About 80% of the species are terrestrial, and most inhabit waterlogged or wet soils, where their tiny bladders can be permanently exposed to water in the substrate. Frequently they will be found in marshy areas where the water table is very close to the surface. Most of the terrestrial species are tropical, although they occur worldwide.

Approximately 15% of the species are aquatic. Most of these drift freely over the surface of ponds and other still, muddy-bottomed waters and only protrude above the surface when flowering, although a few species are adapted to rapidly moving streams or even waterfalls. The plants are usually found in acidic waters, but they are quite capable of growing in alkaline conditions and would very likely do so were it not for the higher level of competition from other plants in alkaline waters. The Common Bladderwort U. vulgaris is an aquatic, and grows into branching rafts with individual stems up to three meters long in ponds and ditches throughout the Northern Hemisphere.

Some South American tropical species are epiphytes, and can be found growing in wet moss and spongy bark on trees in rainforests, or even in the watery leaf-rosettes of other epiphytes such as various Tillandsia (a type of Bromeliad, or air plant) species. Rosette epiphytes such as U. nelumbifolia put out runners, looking for other nearby bromeliads to colonies.

The plants are as highly adapted in their methods of surviving seasonally inclement conditions as they are in their structure and feeding habits. Temperate perennials can require a winter period in which they die back each year, and they will weaken in cultivation if they are not given it; tropical and warm-temperate species, on the other hand, require no dormancy. Floating bladderworts in cold temperate zones such as the UK and Siberia can produce winter buds called turions at the extremities of their stems: as the autumnal light fails and growth slows down, the main plant may rot away or be killed by freezing conditions, but the turions will separate and sink to the bottom of the pond to rest beneath the coming ice until the spring, when they will return to the surface and resume growth. Many Australian species will grow only during the wet season, reducing themselves to tubers only 10 mm long to wait out the dry season. Other species are annual, returning from seed each year.