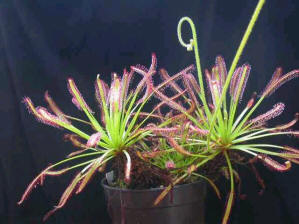 Sundews generally grow in seasonally moist or more rarely constantly wet habitats with acidic soils and high levels of sunlight. Common habitats include bogs, fens, swamps, marshes, the tepuis of Venezuela, the wallums of coastal Australia, the Fynbos of South Africa, and moist stream banks. Many species grow in association with sphagnum moss, which absorbs much of the soil's nutrient supply and also acidifies the soil, making nutrients less available to plant life. This allows sundews, which don't rely on soil-bound nutrients, to flourish where more dominating vegetation would usually out compete them.  For most sundews I use a peat based soil with either sand or perlite add.  Some seem to grow better for me in pure sphagnum moss, D. regia and D. adelae are some examples.

That being said, the genus is very variable in terms of habitat. Individual sundew species have adapted to a wide variety of environments, including atypical habitats such as rainforests, deserts (ex. D. burmannii and D. indica), and even highly shaded environments (Queensland Sundews). The temperate species, which form hibernacula in the winter, are an example of such adaptation to habitats; in general, sundews tend to prefer warm climates, and are only moderately frost-resistant.