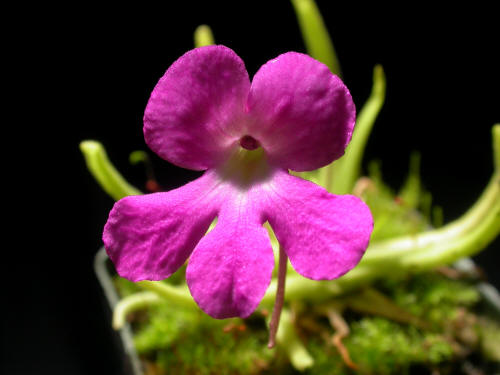 Most Butterworts enjoy an airy soil, I use a peat base with vermiculite, perlite and pumas added.  Butterworts will tolerate a wide array of lighting I grow mine in very bright light with little direct sun.

Butterworts can be divided roughly into two main groups based on the climate in which they grow; each group is the further subdivided based on morphological characteristics. Although these groupings are not cladistically supported by genetic studies, these groupings are nonetheless convenient for horticultural purposes.

Many butterworts cycle between rosettes composed of carnivorous and non-carnivorous leaves as the seasons change, so these two ecological groupings can be further divided according to their ability to produce different leaves during their growing season. If the growth in the summer is different in size or shape to that in the early spring (for temperate species) or in the winter (tropical species), then plants are considered heterophyllous; whereas uniform growth identifies a homophyllous species.

This results in four groupings:

Temperate butterworts: these plants are native to climate zones with cold winters. They produce a winter-resting bud (hibernacula) during the winter.

Heterophyllous temperate species: species where the vegetative and generative rosettes differ in shape and/or size, as seen in P. lutea and P. lusitanica.